In fact, the marquee feature of in-display fingerprint scanner is a hit and miss. The Vivo V11 Pro has much more to offer beyond the in-display sensor. The phone looks stunning, particularly because of the large expansive screen with the unique waterdrop notch. The V11 Pro is fast enough to handle graphics-heavy games smoothly and it runs multiple apps without any lag or stutter. The camera, though, is something that could have been better. But more on this in a while, first let’s take a look at the Vivo V11 Pro. 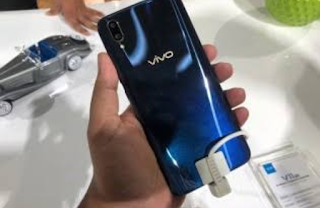 What a beauty! This is the best way to describe the V11 Pro. It looks phenomenal. In my opinion, it is the best looking phone at a price of around Rs 25,000.

The phone looks so good largely because of its screen. The front of the phone is a beautiful 6.4-inch screen that uses an OLED panel. The bezels are almost non-existent and there are blue accents that get highlighted on it every time there is a notification on the phone or whenever you pick it up, in which case the icon for the in-display fingerprint sensor lights up.
Extremely thin bezels also mean the V11 Pro is a compact phone despite its large screen. It fits well in hand and weighs relatively light for such a large phone.

This is not to say everything is perfect. The back cover is a design element I feel could have been better. The golden accent around the camera module — there are two cameras here — goes well with the sparkling blue colour of the phone (this is the variant I reviewed). Vivo calls the finish on the variant that we reviewed Starry Night. It is basically a mix of blue, black and purple with some glittery touch to it. But the back panel itself is made of plastic, and despite its liquid metal or molten glass finish, it does feel cheap. The plastic back cover also make the Vivo V11 Pro seems a less sturdy than a phone like the Nokia 7 Plus, although compared to the Poco F1 it definitely looks and feels better in hands. The shiny finish on the Vivo V11 Pro means you will see smudges and oily fingerprints on it within 30 minutes of use. Thankfully, there is a case bundled with the phone by Vivo and you can use if you don’t want to buy a separate one for it.

People who like watching videos on their phones will love the Vivo V11 Pro. Its screen is absolutely stunning and one of the best things about the phone. If you love playing visually attractive games like the Hitman GO or are a movie buff, you’ll enjoy them more on the V11 Pro. The smartphone comes with a big 6.41-inch Super AMOLED display (good job, Vivo) with 2340 x1080 pixels resolution, aspect ratio of 19:9 and screen to body ratio of 91.27 per cent.

Whether I used the phone under the blazing sun or inside a room, keeping the brightness of the V11 Pro to around 40 to 50 per cent worked perfectly for me. The colours also look pretty real and vibrant.
Performance is another area where the Vivo V11 Pro scores high. The performance is buttery smooth. Run Facebook, WhatsApp, Instagram, YouTube, Twitter and several other apps together and the V11 Pro will still run smoothly. The smartphone doesn’t show any visible lag or stutter, whether you are switching between apps or scrolling through Facebook news feed or playing graphics-heavy games like Asphalt 8.
The V11 Pro is powered by Qualcomm’s Snapdragon 660 processor, and is paired with 6GB RAM and 64GB internal storage. There is support for the microSD card of up to 256GB, if you need that. Another good bit about the performance is that the phone doesn’t heat up much. It runs cool. Even during extended gaming sessions or benchmarking, the phone was never overly hot. As far as benchmarks are concerned, here is what the V11 Pro gets:
The software in the Vivo V11 Pro has elements that are a direct copy of what people using an iPhone gets. This means there is no regular app drawer, similar to what you get most Android phones. The quick action buttons, which sit in the notification shade in most Android phones, have to be accessed in the Vivo V11 Pro by swiping up on from the bottom edge of the screen, similar to how it is done on an iPhone. Then there is a new virtual assistant called Jovi Smart Scene – don’t why companies don’t stick to the Google Assistant that is more user-friendly and competent.
There are even apps like iMusic, a music player from probably Vivo, preinstalled on the phone. The V11 Pro comes pre-loaded with several apps from Google like the Google Lens, Google Duo, and other third party apps like NewsPoint, UC Browser, Amazon Shopping app, PhonePe, among others. Some of the apps can be deleted from the phone, while some can’t be uninstalled.

The V11 Pro can last one full day on a single charge. The phone comes with 3400mAh battery and supports fast charging. Vivo calls the technology “dual-engine charger”. Huh, what? But name aside, the fast charging is one of the best bits about the Vivo V11 Pro. The bundled charger charges about 70 per cent battery in the Vivo V11 Pro in 30 minutes.

“Too many cooks spoil the broth”. This phrase suits perfectly to the software in the V11 Pro. Vivo has put too many features together in the V11 Pro, and which is why you might end up not using most of them. The V11 Pro runs Vivo’s FunTouch OS 4.5 on top of Android 8.1 Oreo and for now, there’s no word if the phone will get Android 9 Pie update or not.

A comparison of Avast Versus Kaspersky Antivirus security software Software