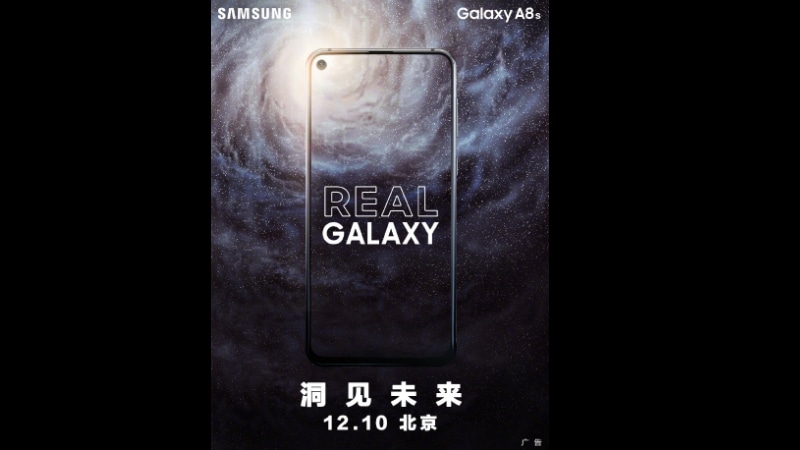 Just a day after Huawei announced that its Nova 4 smartphone will launch on December 17, Samsung has now confirmed the date of the Samsung Galaxy A8s smartphone launch. Both the phones have similar designs with a display hole for the selfie camera, and the two companies were in a battle to be the first ones to launch the new phones with this unique design. It seems like Samsung was waiting for Huawei to announce its launch date, for it to then decide its launch event date for a week earlier.

Samsung has published a poster on Weibo announcing that the Galaxy A8s smartphone will launch on December 10. The poster is uncannily similar to what Huawei put out just a day ago, with the outline of the phone visible, and the camera hole on the top left. The smartphone is seen to sport a true bezel-less display with no notch or chin whatsoever, and the display will be called the Infinity-O Type display. The poster also has a background of the galaxy, and the company takes a jab at Huawei by captioning it ‘Real Galaxy’.

Based on previous leaks, the Samsung Galaxy A8s is rumoured to debut with a 6.39-inch display with a full-HD+ resolution and 19.5:9 aspect ratio. It is also said to have a Qualcomm Snapdragon 710 SoC, paired with 6GB of LPDDR4 RAM and 128GB internal storage that is expandable via microSD card (up to 512GB).

In terms of cameras, the Samsung Galaxy A8s is rumoured to bear 24-megapixel, 5-megapixel, and 10-megapixel sensors at the back. At the front, there is a 24-megapixel sensor that will be placed in a display hole. The size of the hole is said to be 6.7mm. In terms of dimensions, the smartphone measures 159.11×74.88×7.38mm. it is reported that the smartphone will launch in a Black-Grey gradient colour option. Further, the handset is speculated to come with a 3,400mAh battery and have a USB Type-C port. It is also reported to come without 3.5mm audio jack support.

The Huawei Nova 4, as mentioned, will launch on December 17, and will arrive with a similar design. Expected specs include the latest Kirin 980 SoC, 6GB RAM, 128GB storage, an in-display fingerprint sensor, and will run on Android 9 Pie out-of-the-box.