iQoo Z1 5G, an upcoming smartphone from the new company, will be unveiled on May 19 and iQoo is trying to get people hyped for the launch by revealing some key specification of the phone. With a couple of new posters on Weibo, iQoo has confirmed the iQoo Z1 5G will be powered by the MediaTek Dimensity 1000+ SoC, along with some other details. The company recently shared some live images of the phone showing off the design and colour options. Additionally, in a separate leak, the price for the iQoo Z1 5G has been tipped, thanks to a promotional poster.

The online event will be held on May 19 at 2:30pm CST (12pm IST) as seen in one of the official posters on Weibo. As of now, iQoo has not announced where the event will be streamed but additional announcements for the same can be expected in the coming days, since the event is just 5 days away.

Talking about the price, a report by 91Mobiles states that a promotional poster shows the pricing for the phone’s 6GB RAM + 128GB storage model. It is priced at CNY 2,498 (roughly Rs. 26,500). This is expected to be one of the configurations the iQoo Z1 5G will come in. 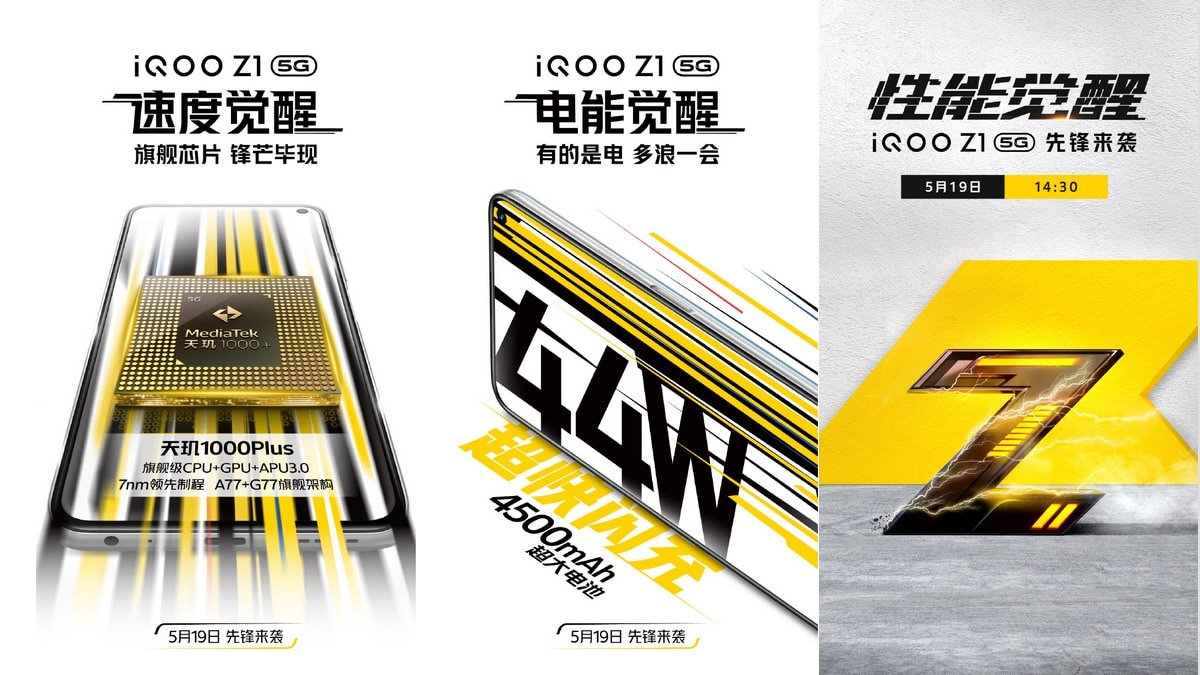 iQoo shared two posters on Weibo on Thursday, May 14, confirming the processor, battery capacity, and charging speed for the iQoo Z1 5G. The first poster states the phone will be powered by the 7nm MediaTek Dimensity 1000+ CPU with an integrated GPU. The second poster states the phone will come with a 4,500mAh battery and will support 44W fast charging. Talking about the design and colour options, a separate post by the company shows live images of the phone and reveals two colour options – Galaxy Silver and Space Blue (translated). It also shows three cameras on the back placed in a rectangular module on the top left corner of the phone. From the images, we can make out that iQoo Z1 5G will have a side mounted fingerprint scanner and the volume buttons placed on the right side of the phone.

Vineet Washington
Vineet Washington writes about gaming, smartphones, audio devices, and new technologies for Gadgets 360, out of Delhi. Vineet is a Senior Sub-editor for Gadgets 360, and has frequently written about gaming on all platforms and new developments in the world of smartphones. In his free time, Vineet likes to play video games, make clay models, play the guitar, watch sketch-comedy, and anime. Vineet is available on [email protected], so please send in your leads and tips.
More