India accounted for the most downloads of the video conferencing app Zoom in April despite the government warnings against its official use and various security issues, app intelligence firm Sensor Tower said. According to the firm, Zoom topped 131 million downloads last month, of which 18.2 percent came from India, followed by the US. Apart from Zoom, TikTok also saw massive growth last month with over 107 million downloads globally. India also contributed the most – 22 percent – to the TikTok downloads.

As people follow social distancing guidelines amidst the coronavirus pandemic, they have moved to video conferencing apps like Zoom and Google Meet to not just take care of the work obligations but also to remain in contact with their friends and family. Zoom and other app are also being used by the school for virtual classrooms as students can’t physically go to screen during the lockdowns. This has led to the massive uptake of Zoom that has seen its downloads surge multiple fold over the last couple of months. Zoom’s popularity hasn’t been without issues and controversies and had even led to creation of the term “zoombombing.” Zoombombing refers to incidents when random strangers pop up in non-secure Zoom meetings and harass the users.

These issues forced the government to warn its officials from using the app last month and issue a set of precautions for the public at large. In the advisory dated April 12, the Cyber Coordination Centre (CyCord) of the Ministry of Home Affairs highlighted security concerns about Zoom. Stressing that Zoom should not be used by government offices/ officials for official purposes, CyCord added that it could still be used by individuals in their personal capacity. If they choose to do so, they should follow security best practices. Even the Computer Emergency Response Team of India, the national cybersecurity agency, had cautioned against the unguarded usage of the app and issued an advisory outlining the safety measures for both the operator and the users.

Following the news surrounding security issues and its ban by various organisations as well as countries, Zoom announced that it is making several changes to the app to enhance the security and privacy. In the same bid, the company earlier this week purchased encryption startup Keybase that will help it make the video calls placed through the app end-to-end encrypted. 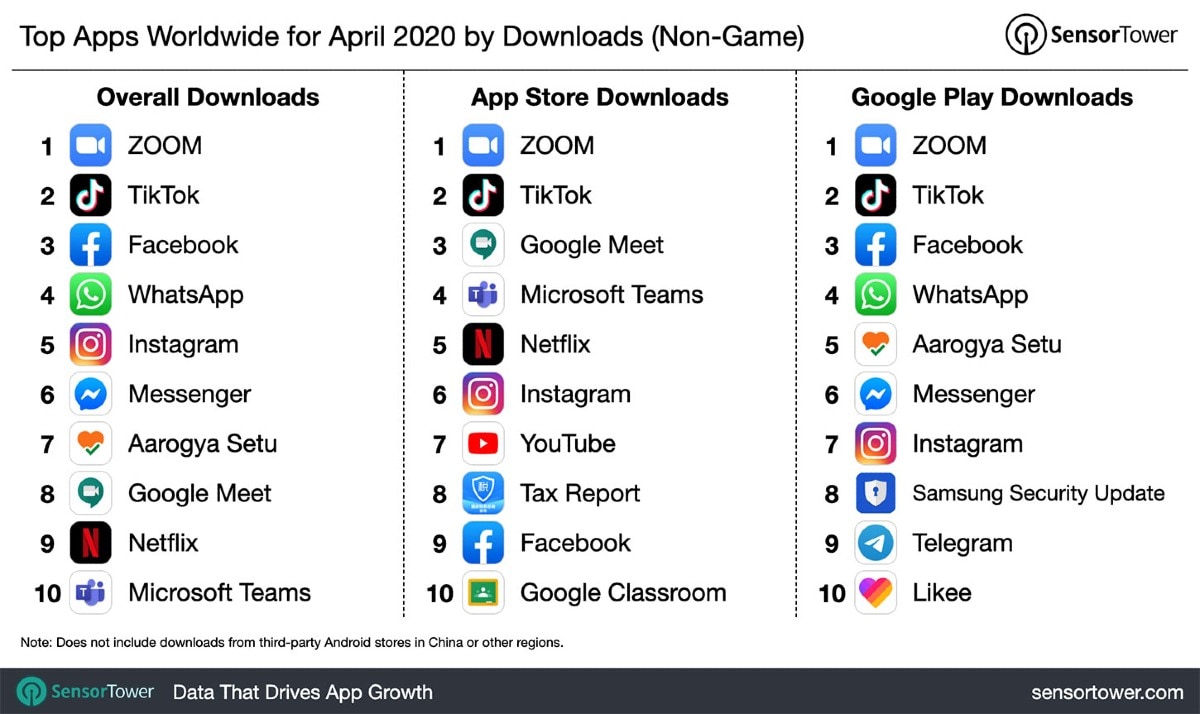 Sensor Tower also claims that Zoom was the most downloaded non-game app globally in April and saw a 60x year-on-year growth. Apart from India, Zoom downloads came from the US that accounted for 14.3 percent of the total downloads.

The firm released the most downloaded apps list for April 2020 and it features TikTok, Facebook, WhatsApp, Instagram, and Messenger, apart from Zoom. Google Meet and Microsoft Team, the rival apps to Zoom, are also present in the list. Tiktok was the second most downloaded app last month, and as mentioned, India accounted for 22 percent of total TikTok downloads previous month, followed by the US with 9.4 percent.

Facebook May Have to Sell Giphy on Britain’s Competition Concerns