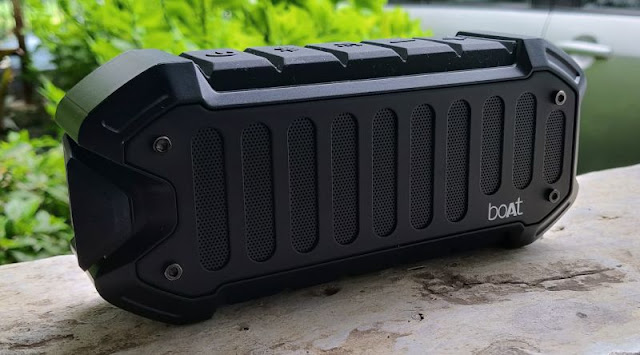 Wireless speakers in the budget segment can be broadly classified into two categories  portable speakers and smart speakers. The latter includes options such as the Google Home Mini and Amazon Echo Dot, which can connect to the Internet and fetch audio content, as well as respond to your voice commands. However, these need to be plugged in at all times.

On the other hand, portable wireless speakers have the convenience of working entirely on battery power. That involves pairing them with a smartphone or other source device to get your music from, whether downloaded or streamed. But what if you could have smart connectivity on a portable speaker, offering you the best of both worlds?

The Boat Stone 700A aims to offer exactly that. Priced at Rs. 3,499, this portable speaker has the ability to invoke Alexa, the voice-based assistant from Amazon, on your smartphone. Can the Boat Stone 700A be a viable alternative to a tethered smart speaker? We find out in our review.

Boat Stone 700A design and specifications

The Boat Stone 700A is the successor to the Boat Stone 700, and sports nearly the same design and specifications. The big difference is the addition of Amazon Alexa support, which works using a paired smartphone over Bluetooth.

For it to work, you need to first set up the system. This involves installing the Boat Nirvana app  available for Android and iOS devices  on your smartphone, and pairing it with the Boat Stone 700A over Bluetooth. The speaker then uses the data or Wi-Fi connection on your smartphone to communicate with Alexa.

This means that your smartphone handles all Alexa duties, and it will need to be connected to the Internet with the Boat Nirvana app running in the background. It’s a workaround, but one that does the job, assuming your phone is close by and has the app running.

Although the Boat Stone 700A will connect to your smartphone over Bluetooth automatically once paired the first time, you will need to open the Boat Nirvana app every time before use in order to use the speaker’s ability to invoke Alexa. We tried this on both Android and iOS, and it worked well in both cases even with the smartphones on standby, with the apps running in the background.

During our review period, the Alexa functionality worked well. The Boat Stone 700A was able to respond to various commands just as an Amazon Echo speaker would. Furthermore, if you have an Amazon Prime subscription, Alexa will be able to fetch music from Amazon Prime Music, making the Boat Stone 700A a functional smart speaker in its own way. While the same functionality can be achieved by giving your smartphone commands directly, the ability to trigger Alexa from the speaker while your phone is in standby or not near you is a useful feature to have.

There are five large rubber buttons on the top for power, Bluetooth pairing/ Alexa, play/ pause/ call answer, volume down, and volume up. On the left is a rubber flap that covers the Micro-USB port for charging and a line-in socket. The seal maintains the IPX6 water ingress protection for the speaker. Unfortunately, you can’t use an SD card to listen to music on the Boat Stone 700A.

Apart from this, the Boat Stone 700A has 10W of sound output through two 1.75-inch full-range drivers, Bluetooth 4.2, and a 2,000mAh battery. We were able to use the device for about 7 hours on a single charge, which is decent for a speaker of this size and in this category. The Boat Stone 700A is also claimed to be shock resistant, but we didn’t put it through any stress tests to verify that claim.

Like many other products in its segment, the Boat Stone 700A promises 10W of sound output through two stereo drivers. Although the drivers aren’t placed far enough apart for the stereo effect to be properly experienced, there is enough in the sound given the price tag. The Boat Stone 700A is loud, sounds decent, and does a good job with audio regardless of the source.

We tested the Boat Stone 700A with a OnePlus 6T ₹ 34,999 paired using Bluetooth. Audio was streamed through Spotify, Apple Music, and Amazon Music, with the last streaming through the Boat Nirvana app and controlled by Alexa through the speaker. We also tried some high-resolution audio tracks of our own.

The Boat Stone 700A offers a refreshingly clean sound for a speaker in this segment. Sound across the frequency range was defined and sharp, with the mid-range in particular sounding powerful and appealing. Listening to ‘Forces… Darling’ by Koop showcased strong vocals, with the soothing jazz-inspired voices punching through the low-end and highs. Despite a stronger mid-range, the highs and lows did sound distinct and defined as well. However, turning the volume up too high led to a bit of distortion in the high-end.

That said, the bass notes sounded better at moderately high volumes, and the mid-range sounded clearer and more enjoyable. Higher volumes might work if you’re using the speaker at a party or with a group, with the speaker placed at some distance, but for personal listening, you’ll find that lower volumes result in better sound quality.

Listening to Bambro Koyo Ganda by Bonobo, the bass felt as punchy and aggressive as a budget speaker can pull off, although it wasn’t quite as tight as what more expensive options such as the JBL Flip 4 are capable of, with a bit missing from the sub-bass.

The neutral sonic signature and clean sound of the Boat Stone 700A ensures that the speaker can handle most genres capably. The strong mid-range gives vocal-focused audio tracks a bit of extra kick, while the highs have just enough sparkle to them to be enjoyable.

The Boat Stone 700A can also be used as a hands-free device for calls, thanks to the built-in microphone. We used it on a few phone calls, and we found it to be decent in terms of call quality on both ends. This, combined with the additional Amazon Alexa functionality and water resistance, make the Boat Stone 700A one of the better wireless speakers that you can buy for around Rs. 3,000 today.

In a segment where wireless speakers are all about volume, output and ruggedness, the Boat Stone 700A offers a feature that few others do  Amazon Alexa compatibility. Although it isn’t truly a standalone smart speaker like the similarly priced Google Home Mini and Amazon Echo Dot, it does offer the same functionality when used with a smartphone, and unlike them, it’s not tethered to the power socket. This combination of features and functions makes it both portable and smart.

At Rs. 3,499, the Boat Stone 700A is perhaps the most interesting speaker you can buy on a small budget. It has a great combination of design, features, and sound quality, which gives it a distinct edge over other affordable speakers.