Amazon Prime members in India can now avail gaming benefits, including free access to in-game content, upgrades, and in-game currency. Amazon has also tied up with some mobile game developers to host Prime-only tournaments for its Prime members in the country. The list of games that will offer you benefits if you own an Amazon Prime subscription includes Mobile Legends: Bang Bang, Words With Friends 2, Mafia City, and World Cricket Championship 2. You will also get in-game content for free upon signing in with your Amazon Prime account on mobile games such as the Black Desert Mobile and The Seven Deadly Sins: Grand Cross.

A dedicated microsite has been created by Amazon to list all the gaming benefits for Prime members. You can also view all the free content you’ll get on your favourite mobile game through the Amazon app.

How to avail gaming benefits on Amazon Prime membership

To avail the benefits, you need to download the one of the listed games for Prime members on your Android or iOS device. Once downloaded, you’ll need to look for a banner showing off benefits for Amazon Prime members. Tap that banner and then hit the Login With Amazon button on the pop-up screen to log in using your Amazon Prime credentials. You’ll then be redirected to an Amazon page from where you need to allow access to your Amazon account. After that, your game will show you the Prime Member Reward. You just need to tap Claim! to claim that reward and add the given benefits to your game. 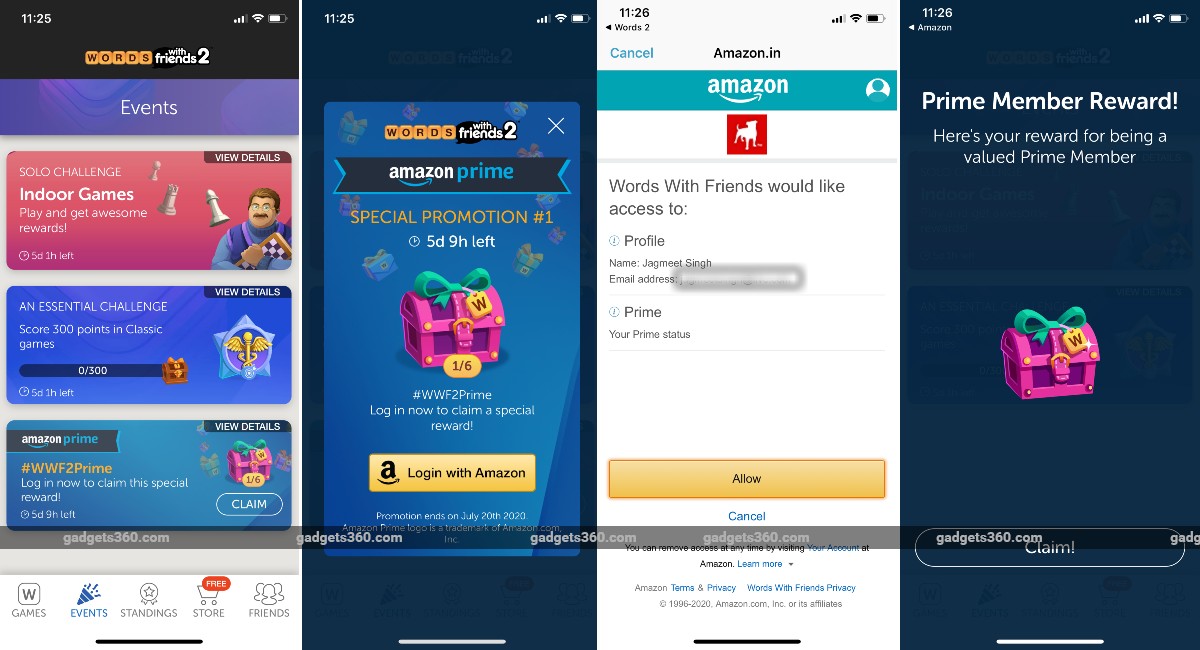 Limited goodies initially
Amazon Prime members get benefits such as a Stadium Unlock for World Cricket Championship 2, 50 Gold and 10K Cash for Mafia City, an item chest and hero and skin trial cards from Mobile Legends: Bang Bang, and a Mystery Box from Words With Friends 2. The e-commerce giant is also set to bring in-game content from games such as Ludo King and refresh the selection on a regular basis with new games and content launches promised every month.

“We will continue to add new in-game content for other popular games, with frequent content refreshes,” said Akshay Sahi, Director and Head of Prime, Amazon India, in a statement.

However, the initial list of games that have added free in-game content for Amazon Prime members includes a total of six games, namely the Black Desert Mobile, Legends: Bang Bang, Mafia City, The Seven Deadly Sins: Grand Cross, Words With Friends 2, and World Cricket Championship 2. The benefits offered at present are also not that pleasing to attract the masses.

That being said, the move by Amazon could give a tough fight to Flipkart that already has a dedicated gaming section with arcade games such as Snake Smash, Guess What, and Crazy Cannon.

Another addition for Prime members
The latest addition joins the existing Prime membership benefits that include free, fast delivery of goods, access to movies and TV shows through Amazon Prime Video, ad-free music via Amazon Prime Music, and free ebooks to read through Prime Reading. It also comes amid the coronavirus outbreak that has forced people to stay at home.

Amazon hasn’t revealed the total number of Prime members in India. The subscription-based service is available at Rs. 129 a month or Rs. 999 a year. Globally, there are over 150 million paid Prime members.

In the US, Amazon Prime members are eligible to avail free mobile game content since September last year. The company also has a Twitch Prime offering that brings additional benefits such as channel subscriptions and access to select video games for gamers involved in PC and console platforms.

In 2020, will WhatsApp get the killer feature that every Indian is waiting for? Samsung Galaxy S20 in India? We discussed this on Orbital, our weekly technology podcast, which you can subscribe to via Apple Podcasts or RSS, download the episode, or just hit the play button below.

Affiliate links may be automatically generated – see our ethics statement for details.

Why Far Cry 6 Player Character Dani Rojas Has a Face, a First for Far Cry